Back In The Spotlight!

At the end of May 2018 online retailer TruffleShuffle.com announced the launch of a new product line.

There are currently 13 items listed, featuring vintage artwork by T.C.F.C's Mark Spangler, who helped to design The Get Along Gang back in the early 1980s along with Tony Byrd, Ralph Shaffer, Muriel Fahrion, Tom Jacobs and Linda Edwards.

It's not yet clear if this marks the beginning of an official relaunch or not. So far, there's been nothing in the licensing press or from American Greetings Entertainment, which is slightly odd. This could just be Am' Greetings "testing the water" rather than spending thousands of hours and millions of dollars working on a comeback for the Gang, only to find there isn't a substantial market for the property.

Email ThisBlogThis!Share to TwitterShare to FacebookShare to Pinterest
Labels: American Greetings, Blast From The Past, Get Along Gang 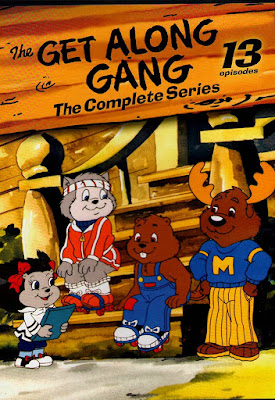 At long last Mill Creek Entertainment have pulled their fingers out and released the Complete Get Along Gang TV series on region 1 DVD. In this case "complete" means "just the DiC SatAm episodes" and not, as some might have hoped, the Nelvana T.V. special as well. There's also no info on extras or overall picture and sound quality but at least we now appear to have a legitimate release instead of just another hastily cobbled together knock-off.

Here's the rear of the DVD sleeve with the (now complete) episode list and some hilariously off beam character descriptions. }-D 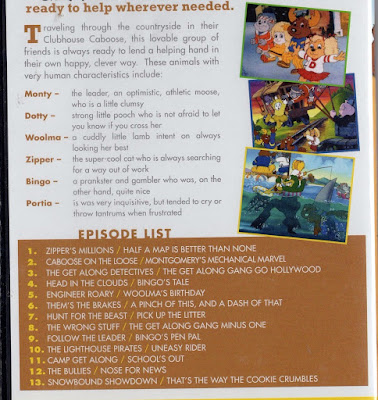 Zipper - It's possible the blurb writer meant "always looking for ways to work out" which would have been rather more accurate.  Idleness wasn't part of Zipper's character profile.

Portia - Although this character did sometimes lose her cool, in response to being patronised or ignored, in the DiC series she was typically depicted as level headed and perceptive beyond her years hence "logical Portia will figure it out" as the theme song puts it. In the Scholastic picture book "The Get Along Gang and the Crybaby" , Portia did cry and throw tantrums to get her own way until, with a little help from her friends, she learns not to.

It's also worth pointing out that the cover illustration now makes a lot more sense as the episode it's from, "School's Out" is actually included. The top screen grab on the rear of the case is from the beginning of "Bingo's Pen Pal" but the two beneath it are not from any known episode. You'd think that they'd be able to find at least two more scenes from actual episodes instead of falling back on stock photos.

The Buddy Bears were intended to be a send up of "The Get Along Gang" and other allegedly similar shows which have faced in the past and continue to face entirely bogus charges of "promoting group harmony over individual validation". The thing about works of satire is that in order to work they have to resemble the thing they're attacking in more than just a superficial way and the B.B.'s just don't cut the mustard.

Besides having next to no visual resemblance to the characters they're ostensibly lampooning, their twisted take on "getting along" i.e. always doing what your buddies are doing or always ordering the same thing in a cafe, even if you don't want to, in every episode no less, is not backed up by the available evidence.

There are however scenes in the original, that could be creatively misconstrued by those skilled in the dark arts of spin and malicious gossip. Those scenes typically depict some character practicing so called "Individual Validation" in a way which puts the others at an unfair disadvantage and sometimes even in actual physical danger. Who in their right mind would celebrate and promote such a thing? Not the Get Along Gang and not their script writers and creators either!

This blogger can't promise that The Get Along Gang, at least in the form that it eventually took, will entertain or inspire all those who encounter it but for those in doubt surely it would be better to find out for themselves if it's for them or not instead of relying on unfairly biased and substantially untrue allegations made by "animation historians" and "walking encyclopedias of cartoon knowledge" that are not always as trustworthy as they seem.

Though mentioning his stint at Marvel UK only in brief, focussing instead on his more recent work for D.C. Thomson and other clients, because of his contribution to adapting "The Get Along Gang" for a British audience it still warrants a place in the newly re-titled Sidebar Of Honour. :-)
Posted by Paul M. at 10/28/2014 03:53:00 pm No comments: 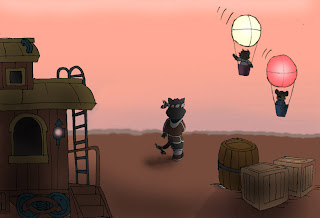 More info-morsels about the Cookie Jar/Mill Creek Get Along Gang DVD release have just emerged.